No, I’m not writing about the Hunger Games sequel, I am referring to the contagiousness of fun.  And we are having fun at CrossFit Empower on Dunbar Street in Vancouver! 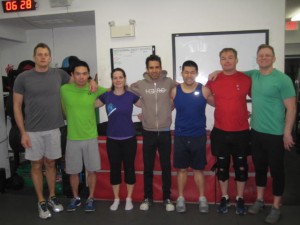 Yesterday was a make up day so folks could catch up on missed WODs from earlier in the week.  A few like Codex chose the row, hip extension, sit up, run WOD. 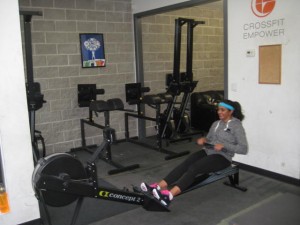 Many chose to do the Tabata squats & handstand holds.  Of those BFG ruled the bunch being only the 2nd person to break 500 points total with a 2:17 handstand hold! 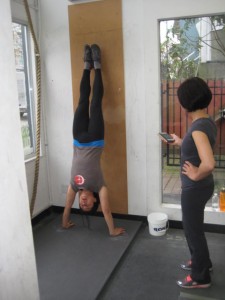 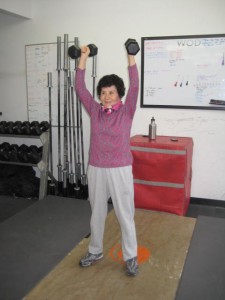 A good number of people also chose to work weaknesses.  Dangers worked bench press and shoulder press and let me join in for a few fun sets.

But the real action was on this month’s weakness board.  We had three items on the list this month and you really went after them!

1)  The squat hold looks to be ruled by Aquagirl’s 7 minute record.  Doc Disc and I tried to beat it.  He made it to 2 minutes.  I managed 5 minutes and 10 seconds before folding over on my face, cramping legs rendered useless beneath me.

2) Hanging hold.  There were some good holds but the KidFit crew went after this record with a fury.  Velocity shattered previous records with an incredible 2:02 hang time.  MVP saw his 2 minutes and raised him another minute with the current gym record of 3:02!

3) But the most contested category belongs to the max rep consecutive single unders.  After WODs were completed it seemed like everyone wanted to hang around and try this one including my Mother-in-Law Go.  The day started with Super Mario on top with 211 but I overtook him and beat Prime’s 225 with a solid 230.  Sam I Am had plans for domination with what looked like an untouchable 295.  And the score did appear out of reach.  At least until 8pm.  Aquagirl set to work with determination first scoring 420 and then 540.  But Haiku put himself into some sort of robot like trance and hammered out 1450 consecutive singles to crush all hope. 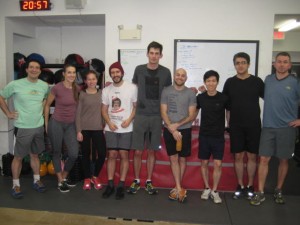 It was so much fun to watch everyone playing and getting fitter in the process.  Kids don’t need gyms because they know how to play and stay active (or they used to in my day).  We are so happy to see our members rediscovering how to play and how much fun it is to move!

Come play with us https://www.empowereverybody.com/get-started/ 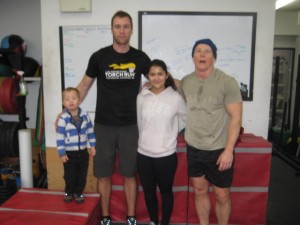