Saturday morning they came from around Vancouver to battle it out on Dunbar Street in CrossFit Empower’s team rowing regatta.  4 rowing machines, 45 minutes, 1 team.  How far could they row?

The 7am crew was stacked: Boomer, Motor, Terminator, Magnum & BFG!  5 rowers meant they could take breaks and keep rowers fresh.  Team Gray & White rowed a total 41 813m in the allotted 45 minutes for an average of 8363m each.  An impressive start! 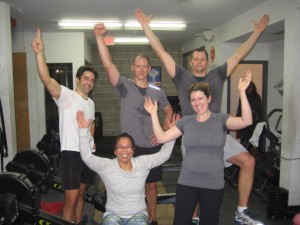 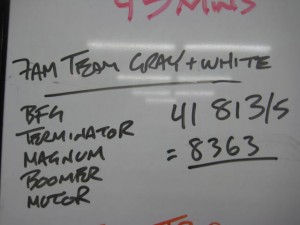 8am Did not look as promising.  Only 3 people showed up: Codex, FeProf & Prime.  No doubt Prime & FeProf are dominant rowers but with only 3 rowers going and no one to spell them off they would have to dig deep if they planned to be competitive.  And they did!  Needing an average of 8400m each to win they gave a gutsy performance.  Codex exceeded her target with 8700+m.  FeProf finished with 9700+m and Prime crushed it with 11,000+m.  With 29 990m rowed between the three of them they finished with a per rower average of 9997m!  A number that almost guaranteed them first place. 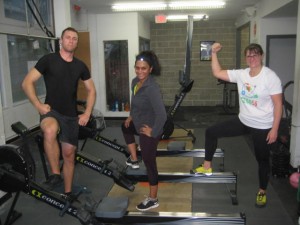 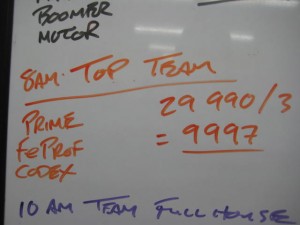 With 8 rowers present the 10am proved the law of diminishing returns.  After a certain point, more is not better.  Despite great team work and strategy they were beaten by the math before they could even begin.  To win they would need to put 20,000m on each of 4 rowers inside only 45 minutes.  But despite the handicap they stayed cheerful and made a fun WOD out of it.  Thanks for being great sports! 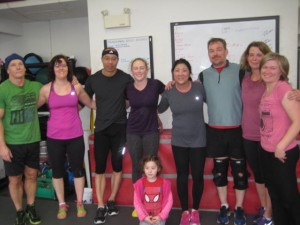 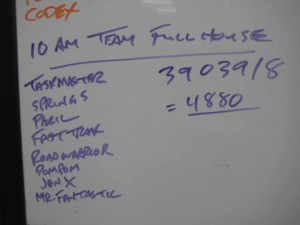 Team WOD
At 3pm the competitive theme continued as 10 athletes showed up to help our competitors prepare for the 2016 CrossFit Open.  Today we had 3 WOD stations each a triplet with a 5 minute cap.  We competed in pairs partner vs partner.  All 5 pairs went through each of the 3 stations with a 5 minute rest between events.

Dangers and The Touch paired up as our 2 top competitors, I took on the rising star Aquagirl, Mr. Fantastic & Super Mario were a good match, newcomer Jet faced veteran Shades and Motor laid a solid beat down on HeeHee.  In the end, burpees were awarded to the loser of each event and then we raced through the penalty burpees with last finishers earning themselves even more burpees.

Does it sound fun?  Because it was!  And hard.  Very, very hard.  Much like the events at the Open.

Aquagirl beat me in event #1 earning me 10 penalty burpees.  We both finished inside the 5 minutes.  The easiest station by far.

In event #2 neither of us made it through the thrusters to the pull up bar but I managed to squeeze out 1 rep more for a win by the narrowest margin.

Event#3 I made it to the T2B but could not finish before time ran out.

Thanks to everyone who came out to help us train! 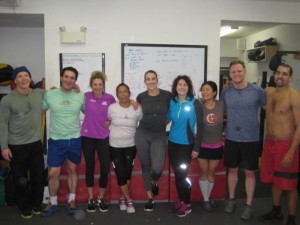 Fitness has never been this much fun!  Bored of your fitness routine?  We’ll show you how to turn fitness into play https://www.empowereverybody.com/get-started/