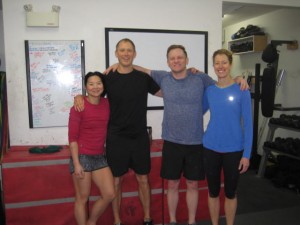 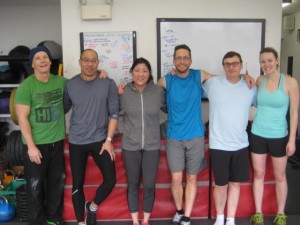 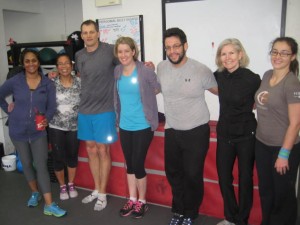 But in the afternoon things heated up with our Team WOD.  Like other CrossFits all over Vancouver and the world our competitors are getting geared up for the 2016 CrossFit Open.  With a full class once again we split into 3 heats of 4.

We raced against the others in our heat with burpees being awarded for the losers.  In the wise words of Ricky Bobby from Talladega Nights “If you’re not first you’re last” therefore everyone not first in their heat earned penalty burpees.

In heat 1 Jet destroyed it claiming first place as she reached the OHS.  In heat 2 it was Shades leading the men as she made it as far as the bar over burpees.  Heat 3 I can detail more vividly as I was in it.

The Touch & I reached the thrusters at the same time but he was done those and to the pull up bar before me.  He had a solid head start on the OHS but that is my forte.  I had to dig deep not to put that bar down but completed 20 in a row to get ahead of him.  It was just enough to get me a one rep lead on the bar over burpees.  But my legs were dead and my arms too.  By rep 2 my arms were too weak to support me so I’d flop face first to the floor every time.  Meanwhile The Touch was accelerating by me.  He must have been at at least 12 reps when the timer ran out.  I collapsed on my face at only 5 reps.  It was many minutes before I could get upright and when I tried to coach the class on to event #2 my legs buckled and I found myself on the mats again.

Jet once again ruled her heat making it off the T2B.  Shades was the same dominating the guys.  I was happy the long break allowed me to recover fully from event 1.

The 1st 49 DU were done in a flash but I stumbled on the 50th and missed it several times significantly slowing me down.  I was still 1st to the deadlift.  Here I took it easy doing careful sets of 5 to keep my back healthy.  The Touch & Aquagirl easily passed me and were done the box jumps by the time I got there.  But I started to gain ground on the cleans finishing just a rep behind them.  They had a lead on T2B but I felt good.  I quickly passed Aquagirl but The Touch was moving well too.  When time ran out I was 12 reps in and The Touch had won again with 21 reps.  I couldn’t help feeling satisfied anyhow as I felt I was moving well.  He just happened to be better. 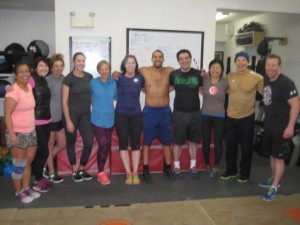 I really enjoyed the competition it certainly helped me push much harder than I typically would.  The events were tough but typical of the Open.  It is but a month away.  I am confident our team will be ready:)

If you haven’t tried CrossFit then you don’t know how fun fitness can be!  Why don’t you check us out?  https://www.empowereverybody.com/get-started/