Saturday 3pm we had our 2nd Team WOD.  Today Music Man, The Touch, Still Waters, Terminator, Mellow, Smash & Aquagirl were on hand.  Of course I was too busy working out to take pictures so instead I had to use past photos to represent.

After a quick recap of our skills itinerary we hit a 5 minute warm up.  Partner A held a flexed arm hang while partner B completed dumbbell front squats & presses with partners switching roles every time A took a break.

We took about 25 minutes to work on weaknesses.  I continued work on pistols & muscle ups.  Music Man got his first T2B 7 unassisted pull ups!!! 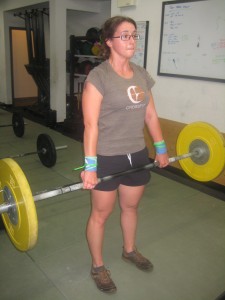 Then it was time for our team WOD.  We made Aquagirl & Still Waters captains and they picked teams.  Still Waters went first and wisely chose Music Man who is an unbeatable workhorse on these types of WODs.  Aquagirl automatically got Mellow who has similar workman’s strength as Music Man.  Aquagirl flattered me by picking me next but personally, had I been choosing, I would have gone with The Touch.  I have him beat on the double unders and might still be a shade stronger but his stamina and cardio are much better than mine and in these grueling WODs that makes a big difference.  Still Waters automatically got The Touch and then selected Terminator figuring his size would be an asset which meant that we got Smash whose speed and endurance make him a good pick.

Aquagirl got first pick of stations and chose well with Station #1 which was more technical and therefore a good one to do while fresh.

Station #1
One partner working at a time we had to complete, as a team, a total of 400 DU but reps only counted as long as we held the weighted hex bar off the floor.  This was probably the station where I helped my team the most as I could hold the bar awhile and my DU’s are good.  Later The Touch scored a PB with 60 consecutive DU at this station! 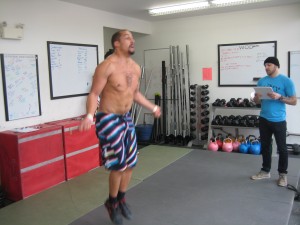 Station #2
We had to complete 40 bar traverses which was Mellow’s forte.  During the traverse we had to hold the 185# yoke off the ground. 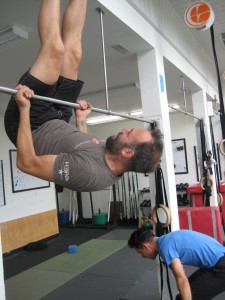 Station #3
80 Tractor tire flips while one member held the beer keg overhead in a locked out position. 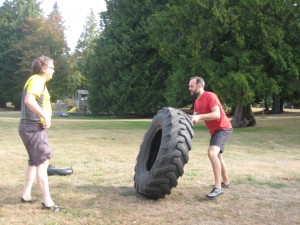 Station #4
400m Gravel bag carry @100#.  Mellow had the idea to put this on our shoulders instead of carry it and that paid off.

Station #5
Last week’s toughest station made a return: 800m Sled Pull with horseshoe bag carry.  It was easier with 4 of us than with just Yeti & I but my legs were dead and I felt myself flagging in this final event as we rounded Dunbar Street.  The weather was gorgeous but it felt wrong for this kind of WOD, a miserable, grey, rainy Vancouver day would have been a better match for the suffering I was enduring. 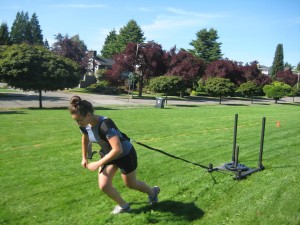 Afterwards came the BBQ.  Mellow & The Touch brought some meat & we grilled it up and ate whilst the kids played.  We were hungry! 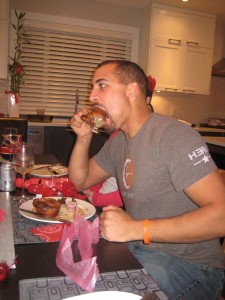 Once again I was left needing a day off for recovery from the Team WOD.  I am very happy with how well it is working and with all the breakthroughs our athletes are having with it!