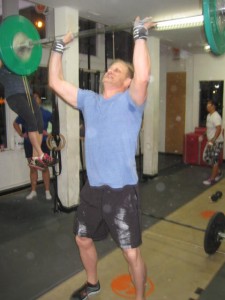 August was a break through month for our Personal Best board and as everyone returned to Vancouver for the fall, September’s board was even better!  We are one week into October and already we’ve had multiple Personal Bests on Fran & Nancy.

Today Music Man posted a 325# 3-rep back squat.  Last night Dangers posted a gym record on Karen, The Touch destroyed Diane and Bruiser got a best on Grace.

How is this possible?  Something in the water on Dunbar Street?  I think it is something called the Dangers Effect.  Let me explain.

CrossFit programming works.  I know it works.  I was as skeptical as anyone when I started.  But you cannot argue with results.  CrossFit worked, it worked fabulously.  First for me, then for people I trained with.  Religion relies on faith but CrossFit is measured by facts.  We can quantify improvements.  And when you begin to believe then anything becomes possible.

When CrossFit Empower opened on Dunbar Street in March 2013 The Touch & I set the standard for what was possible.  But were we products of CrossFit programming or just naturally gifted athletes?  Only we knew the truth, the rest of the community had to take it on faith.  You trained and got fitter, we trained and got fitter and the rising tide lifted all boats but we continued to set the standard.

Athletes like Bruiser & Sandman arrived who might beat us but they were beasts before CrossFit so they hardly counted.

But after a couple years athletes like Dangers began to emerge.  And not only Dangers but Hard Rock, Super Mario, Fast Trak, Aquagirl and many others who have been training consistently and delivering break out performances.

What is remarkable about these athletes is that they were not especially remarkable.  At least not at the beginning.

Dangers was not a bad athlete but there was nothing about his early training that suggested he would soon be besting his coaches.  He was a really nice guy and athletically rather average, a little on the soft side.  But he worked hard, showed up consistently, scaled appropriately, paid attention to good form and inch-by-inch he crept up on our top performers.

The difference is that you got to watch his transformation.  You got to see firsthand the power of the CrossFit programming.  Not a coach, just a common man.

This was not Magnum coming in with his already incredible cardio or Music Man who has been lifting heavy in CrossFit for years.  This was someone like you who started out average and has transformed himself into a living, breathing, live action hero!  And when you saw how CrossFit transformed Dangers you realized it could transform you as well.   And once you believe, everything is possible.  And suddenly our community is transformed.

The Touch and I do not set the standards anymore.  You have raised the bar and begun to redefine the performance expectations.  CrossFit works, the proof is before your eyes.  All you need to do is to keep showing up.  You may be the next emergent star!

Dangers did not fill up the Personal Best Board alone.  Our community is gaining athletic momentum, the tide is rising and things are just about to get very, very interesting:)