The Recipe for Fitness 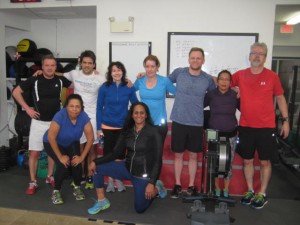 CrossFit’s success began long before it became a household name.  Before Reebok, before ESPN and before there was a CrossFit in every Vancouver neighbourhood CrossFit was already a thriving grass roots community spreading like wildfire.  Why?  Because founder Greg Glassman through two parts genius and three parts dumb luck had stumbled upon the recipe for fitness and had begun giving it out for free.

And it worked.  It worked like nothing else before it had.  Nobody else was producing comparable fitness results because every program before CrossFit was missing one or more ingredients in the recipe.  It’s remarkably simple actually and produces perfect results every time.

So what’s the recipe for fitness?

Constantly Varied
In fitness everything works, nothing works for very long.  I’m sure you have heard of plateaus.  When you repeat the same program over and over you begin to develop efficiencies and you stop adapting.  Your training also defines your weaknesses.  If all you do is cycle, you may get good at that but what about strength and lean muscle mass?  Any training focus must neglect another area of fitness unless your program is constantly varied.

Functional Movement
Do you still use the pec deck?  Have you ever stopped to ask yourself how that machine is making you fitter?  When exactly does your real life outside the gym require strength in that particular range of motion?  Don’t mistake body building for fitness.  There is nothing wrong with bulging biceps or sculpted quads but let’s be clear, these isolation exercises are about form, not about function.  Fitness in the real world requires excellence in full body, multi joint movements like deadlifts (picking your toddler up off the ground) and squatting (getting up off the toilet).  Functional movement has nothing to do with balancing on a Swiss ball while performing bicep curls.  Functional movements are movements that you need to get through your daily life outside the gym.

High (relative) Intensity
Intensity produces results.  In fact, it is the only thing that will.  Of course intensity is a relative term and will vary between individuals.  Our 70 year old athletes train at a different intensity than our 30 year old athletes but they are all training at an intensity that challenges them.  Intensity is quantifiable as work divided by time or force x distance/time (FxD/T).  Training at high intensity produces accelerated neuro-endocrine adaptations which means you get fitter in a big way.  No amount of jogging will produce the physique or athleticism of a sprinter.  No amount of Yoga will develop the strength and physique of a gymnast.  Not every activity needs to be intense but without bouts of intensity adaptations will be blunted.

Community
We are the average of our 5 closest friends.  Look around you.  Are the people around you fit?  If you want to be fit, be around fit people.  A community that pushes you and celebrates your accomplishments.  Going to the gym alone sucks.  It feels like a chore.  Hanging out and playing with friends is like being a kid in the playground again.

Measure It
What you can’t measure doesn’t exist.  The push for continuous self improvement must be quantified in order to be sustained.  And what you quantify can then be turned into a game with short and long term goals to take aim at.  Each new success, each new milestone inspires and motivates you forward.  It is a very fulfilling feeling to regularly accomplish new feats of fitness.

CrossFit as an organization may or may not endure but the recipe for fitness that founder Greg Glassman put out into the world will continue to spread among those who are interested in reliably producing and experiencing actual fitness results.  It will be perpetuated by communities like ours on Dunbar Street wherein friends and neighbours gather to enjoy each others company while embracing a spirit of active play.

Want to learn more about the recipe for fitness?  https://www.empowereverybody.com/get-started/